A SOUND OF PLUNDER

If you were transported back in time for a month or more, what would you bring from the present?

It is not here our need nor our intent to comment on the technology involved in such an action, and so we must take the notion of time travel as a done deal that we do not have to think about. There are certain conventions we should probably note that are so well planned and conventional that you never have to even consider them. We shall therefore make it a convention that any method you use for traveling back in time is accompanied by a mechanism for returning you to the present.

We have to make the leap of faith that there is no language difficulties, though the accents might be amusing. We assume that there is a space about the person of the time traveler which can include material goods and convey them into the past. Let us further assume that you have done enough research to know an appropriate time to visit, appropriate clothing and an appropriate area for your appearance so that you are not appearing as some kind of angelic apparition in the middle of a crowded London street. Appropriate health immunizations (no non-vaxers need apply). Can you have tattoos or other body mods? Let us err on the side of caution for the most part, but even if tattoos were discovered to be common, certain tattoos—such as that of the Tasmanian Devil—should be avoided!

You obviously do not want to bring back any watches—digital or mechanical, large or small—with you, as well as no spectacles. No garments made with modern fabrics, especially artificial, or made with modern mechanical devices, should be brought. Even modern colors, dyes or anything that might alter the progress of time and technology. In fact, there are certain drawbacks to almost anything that could be brought back in time.

If you have a list of historical events: Scores of games, victors of wars and battles, economic trends and the such, intending to make a fortune by betting on things, there is always the possibility that these accounts could fall into other people’s hands and so possibly change the future in a number of different ways, not merely because of the knowledge of future events but because someone might want to change something and so the course of time and construction of the future. (Do you really want to cause a Biff?) Any information about future events would need to be committed to memory.

If you brought back a modern firearm, and it fell into the hands of an inventive and resourceful person, it might engender the appearance of such firearms centuries before they were invented. Even its sheer appearance with bullets could change things even if it were not duplicated.
Bringing back edged weapona in the style of the time but made of modern metals is more innocent, but the quality of the metal might inspire smiths to try to duplicate the technology. While it is romantic, perhaps, to assume that this was the source of the Uhtred swords, it is a dangerous interference with the technology of the time!

For the most part, recording devices—such as cameras, camcorders and even audio recorders and certainly a computer—would be valuable; a person commented that five minutes of video footage from the battle of Hastings would be invaluable, but electric charges and batteries must be planned for and included. Realize that there will probably be no way to recharge an electrical device in the past. In addition, there is the matter that any such device must be disguised in some manner. Having a DVD player or a CD player or any similar device to play footage from the future or from the current time might be seen simply as magic…though that would no doubt create certain liabilities by itself!

In the end, perhaps the best thing you could bring would be a first-aid kit. Not only wold this be protective for the traveller, but many of the innovations would be accepted. If you look at, for example, Bald’s Leechbook. There were many healing devices that were used but not fully understood, so that you would not be changing things from altering the technology, though the use of such medicines might save someone who was supposed to die, so that time itself was changed.

Modern electrical or combustion vehicles would arouse too much interest and no doubt change history. Therefore, you would not want to bring automobiles, motorcycles, bicycles or plans, even if they were painted as or otherwise disguised as dragons. Hoof it or ride on a beast or in a wagon drawn by a beast!

It might be most pertinent to ask what you might bring back to the present. Certain any video, photography or audio recordings you might have made. Perhaps pieces of artwork, jewelry and other artifacts of various types. Complete garments would be invaluable for a number of reasons. These would be a great boon to archaeologists. However, if you have a more materialist and pecuniary motive, it might be just as simple and more certain to return to the summer of 1938 and to buy a few mint copies of Action Comics Number One!

PROJECTS FOR THE PANDEMIC I: HNEFATAFL 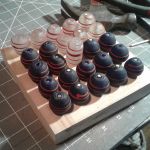 I was able to order two hnefatafl sets, from the Jelling Dragon and one from Tillerman Beads. Although all the taflmenn had holes so they could be turned into pegged pieces, the reason I purchased two sets was that one was pegged and the other not. I bought a set based on Lindisfarne finds from Tillerman, including the rather elegant king that has been recently discovered.

Storage was a big question. The earlier, less accurate pieces were kept in bags, but that frustrated me a bit. Finally, I devised a pegged and a non-pegged storage device, and I felt like a complete prat for not thinking of it. I had two oak squares. One had holes drilled so that the pegged pieces could be set into (onto) the square. The other had pegs rising up from the board, so that the pieces could settle on them (their holes could at least). The results were very pleasing, though I can only assume that this was not done in period. It took up a lot of space! I presume that bags or pouches were used to carry and store the pieces.

The gaming boards are all hand made. I had no foldable leather “boards.” First of all, there is no existing evidence that they were used. All that remain were made of wood or stone; few are whole, since most seems to have rotted away. Second of all, I preferred a wooden board aesthetically. So I made boards.

I made four types, flat and pegged (what I called travel tafl since I can imagine the game being played on ships, and the pieces not skittering around) and straight edges and framed edges (with a raised edge around each side, like the Ballinderry and other board boards). There is still a question about whether the inside was routed out or the edges were added, and both sides can cite good reasons. I did both, and I ended with separate frames attached. The decision was made for mercenary reasons. It was faster, easier and did not result in so much wasted wood!

The squares were carved out, and because it helped communicate to others, certain squares were painted in with milk paint. I put a layer of linseed oil over the board, just to protected the colored squares.

The hnefatafl games are popular among the public as well as people buying them to personally play (I use aquarium stones as the playing pieces, since they are inexpensive and close to accurate pieces, as well as simple wooden pegs for the pegged games). A variety of rules exist, and I have modified the rules I play by. I encourage buyers to feel free to invent their own versions!

FIFTEEN THINGS I WOULD LIKE NEVER TO SEE, HEAR OR SMELL AGAIN!

People who say, “Ahm too bizzy too do resurch or use goggles, so tell me…”

People using the term “Viking” to describe anything Norse.

People mixing something that is definitely post period with their period impression (mixing pre-period goods with period goods is fine and justifiable as long as it is not too often).

People who say they are not racists, just white pridists, because they have Viking blood!

People using the term “authentic” when they mean “historically accurate.”

People who use the Term “Garb” to refer to historical dress, historic costume or soft kit. In fact, I love the good hon est term “costume” and can only think of a person who wears garb as having a shuck of wheat in front of the privates!

People wearing spectacles or sunglasses, whining that it is not safe for them not to do so. Especially people who have never tried to see what they would have had to do visually in period and who try to do things in public that require them to wear magnifying lenses. For that matter, people smoking on the line…whether cigarettes, cigars or pipes.

People who brag about their authentic fantasy LARP and blithely use the term “reenacting” when they mean “fancy dress ball.”

People who justify what they are wearing by saying “If Theyda Haddit, Theyda Usedit.” These are the sorts of halfwits who have the skiffy blasters with their garb.

People who tell me that their polyester costume looks just like linen. Uncertain whether they need to see an optometrist or a psychologist.

People who rationalize their inaccuracies by drawling, “Ah doan speak Old Norse anyway, so why should Ah try to look authentic…?”

People wandering around in historical dress with their telephones pressed to their ears, or watching the screens of their Ipods or carrying their teevee sets on their backs…

People who unthinkingly just try to incorporate current taste into their clothing—such as a big embroidered patch on their dresses—usually without even recognizing it.

People wearing their Air Jordans or other tennis shoes in their historical costume because, as they plaintively whine, “Mah foots are tender lahk, so I gotta baby them. Besides, no one looks at yer shoes…”