From the Viking Word Hoard: A Book Review

Old pal, Chuck Huber, was kind enough to send me a copy of a book not needed by his library and asked me to make a review when I asked him whether I could do anything to thank him for it. So here it is!

From the Viking Word Hoard: A Dictionary of Scandinavian Words in the Languages of Britain and Ireland, Diarmaid Ó Muirith. Four Courts Press; Dublin. ISBN 978-1-84682-173-8

It is always difficult to review dictionaries. Except for some early dictionaries, such as Johnson’s, you can only comment on the accuracy of entries, and perhaps descend into snarkiness and nitpicking. Some entries are spot on; some might be a little off, and it is often difficult for the layman to determine which is which, and the learned academician might have doubts of his own. Reading the entries in a haphazard way has been an enjoyable and illuminating experience, and I hope to continue to dip into the soup from time to time and go away satisfied!

So I guess that the review needs to center on the introduction, in which the author presents a background for the dictionary. While the introduction is, in many senses, quite fascinating, at least for someone interested in seeing how the Norse influence on western and English (and American) culture can be seen ever today. At shows, MoPs are often greatly interested in this and are genuinely appreciative when a person talks to them about it. And the sections on the Norse language’s influence on Irish, on Scottish, on Welsh and of course on English are interesting. The sections on the Norse invasions of the various lands are illuminating, though superficial to what is available elsewhere. If you are sincerely interested in a more detailed investigation of Norse invasions, see Katherine Holman’s The Northern Conquest  for a more general but provenanced view or any of the academic books that are available (for example, F. M. Stenton’s Documents Illustrative of the Social and Economic History of the Danelaw, from Various Collections.

The book does not deal with physical culture, artefacts or much else that reenactors are generally concentrating on, though it is relevant in many was to making a reenactor’s impression richer. It might be more than what a person needs; they might be content with sites such as Wikipedia’s “List of English Words of Old Norse Origin”  or “Viking Words in English”  However, having a copy of this book available is more than a little bit useful!

The reservation I have about the tone of the introduction is the same one that I have with Schama and many other modern historians, where they do an abrupt about face on the matter of modern interpretations of the Norse as a cultured people, a deviation from the propaganda set forth by the literate people—the clerics who were subjected to violence by the Vikings—and adopted as the truth for so many years. The author calls this trend to depict a civilized culture as “pc,” though my interpretation is somewhat different. No doubt, the Vikings were violent. They did invade. They were malicious. They were thugs. But so were the Christians. The author paints the Norse in the old way and do not mention that the Christians were much the same. The difference, to my mind, is that the Christians tended not to do violence to the Church (though this was not a universal); that simple fact, again to my mind, does not necessarily demonize the Norse the way that modern but not contemporary culture has done!

Persons interested in the book for their unit or for personal ownership, should of course consult local bookstores (we have seen with Borders and other local bookstores what not doing this might tend to do). However, for additional information and if it is otherwise unavailable, see http://www.amazon.com/Viking-Word-Hoard-Dictionary-Scandinavian-Languages/dp/1846821738/ref=sr_1_1?ie=UTF8&qid=1313851171&sr=8-1

The book that I was reading when this arrived, and that I put aside to give this a good look was something entirely different. It was the Jack Kirby Omnibus Volume One, and much more in line with what brought Chuck and me—both comic fans—together in the first place. Of relevance to readers of this blog was a story from the 1950s called “The Hammer,” which was about Mjollnir, which was a fun story and which featured a version of Thor totally different in many ways—but was curiously similar—to Kirby’s later version of the Norse deity as a Marvel superhero. Fun stuff, and if you are a comic fan and think of Kirby as essential to modern comics as many fans—myself included—do, you might want to pick up a copy of the book! 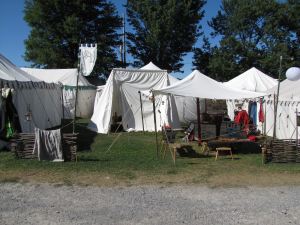 Just back from two weeks camping at what may be the most schizophrenic event in the world: Pennsic. It was the fortieth this year, and its attendees range from the most progressive and accurate reenactors to farbs wanting to get drunk and laid. It started as a Scadian event, and it is still governed to some degree by the Society for Creative Anachronism [SCA] but has long since become something more. I have taken to calling it Burning Man East (though they only burn a drakar model in the lake and would assuredly draw the line at a burning wicker man), although I discovered that a son of Doctor David Friedman—whose idea of accuracy is based in a continuous first-person impression while mine is based more on physical artifacts—tern it that some years before I did! It is a fun event, not merely for the obvious and martial activities—the Scadians call it a “war,” though it is much more, and I term it a “fair”—and I have for years not seen any combat activities.

People wanting any form of consistent accuracy are fools, and many of those who accept the SCA for what it is even think of it as another renn fair or farbfest. Probably so in both cases, but I look at it as a challenge. I have, for the past few years, set up my selling spot with wattle fences, a geteld and a dining fly (awning), so that except for my electrical connection—needed for light after dark—it looks very much like my Regia camp. I’ll forget for the moment about the person who came by this year and pronounced it “cute,” but if she meant “different than anything about it”—then I would question her vocabulary but not her intent. I have looked upon the two-week experience as experimental archaeology, and I get to try certain things that are impossible at a two-day event. Here are a few discoveries I made—both on purpose and inadvertently—this year:

• Hand washing clothes and draping them across the hurdles to dry worked great and, in fact, smelled better than washed clothes when I put them on.

• Driving stakes into dry ground that then gets wet from the rain is a futile gesture. A friend drove in stakes into pre-wettened holes that worked much better.

• Actually an Observation. Flies never fall down–their stakes sliding from the holes in dry earth that gets wet–never fall down when you’re looking at it. It waits until you take your eyes away 😦

• Wearing smooth-soled turnshoes on hilly ground worn smooth over two weeks makes standing up with short benches an achievement. But a little rain makes the traction much better!

• Living at the mercy of the weather makes you more aware of the weather, and you rely neither on fancy electronic devices or on the frantic warnings of those who do. Instead, you look at the sky, at the moon and feeling what the wether feels like. Sometimes, you’re wrong, but you’re usually right. After a while, I came to ignore the frantic warnings–”Gojira is coming,” many of us described it—and trust more in my own instincts and intuitions.

• It was far more comfortable wearing casual dress around the site—undertunic with no belt—and only getting dressed up in overtunics, belts, etc. when formally accepting company or going out on formal visits (though I will admit I didn’t dress up often because of the heat).

• Air conditioning is not imperative. I was comfortable in the heat, even wearing wool, as long as I avoided doing too much. The fact that I go the entire summer without a/c getting ready for the two weeks no doubt helps me.

• In a clear moon, strong external light is not needed.

• If our ancestors had sharp-edged stones everywhere, they would not have had thin-sole turnshoes!

• When you have no access to television, radio and other modern distractions, you find you don’t need them. You can enjoy live music (even if medieval music for the SCA is scarcely medieval; I was waiting for someone to sing “Johnson’s Motor Car” because it was Irish), playing games on real game boards, spinning yarns and just talking to friends you haven’t seen for a while. In that last sense, Pennsic was probably much like a market of the era.

• Our ancestors were much sturdier than we give them credit for. If I didn’t get off site every few days, was able to wear farby shoes when it was muddy or wet and buy cold beverages in the heat of the day, I’d have gone mad. They had no recourse! Vivat, ancestors of almost any era! We’ll try to make you proud!

And finally, an observation: After two weeks of living around campfire smoke, you just don’t smell it. But unpacking things…mmmmmmmmmmm.

For a few of my photos—not the usual ones of people in hockey gear swinging furniture legs and claiming it is medieval combat—see http://www.flickr.com/photos/folo/sets/72157627308566361/.